How the Richest 400 People in America Got So Rich 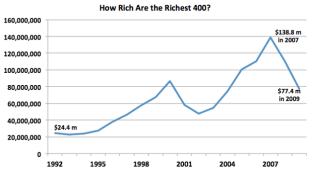 Now, that almost certainly wasn’t the same guy. There’s a lot of churn at the top of the money pyramid. In all of the 1990s, only 25% of the Fortunate 400 made more than one appearance. But the overall message is the same. The rich keep getting richer.

According to the IRS, which recently released 2009 data from the 400 richest individual income tax returns, the real runaway growth in wealth has come from capital gains. In the last years of the bubble, the “Fortunate 400” made nearly half their income from capital gains (a.k.a.: profit from the rising value of an investment, such as stocks or property) and less than 10% of their income from old-fashioned wages.

The average income of a top-400 earner grew by 650% between 1992 and 2007 to a whopping $344 million. Over that time, the average salary didn’t even double. But the average capital gains haul increased by 1,200%. So how do the richest get richer? Not from their wages. From their investments.

Here’s a look at the average salary and average capital gains income of a top-400 earner since 1992. Y-axis is labeled in thousands of dollars and all-time highs are noted in the graph. 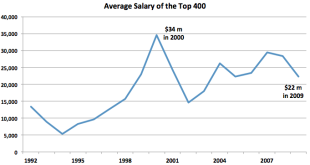 (1) Who are these people? As Tim Noah explained on our business page, a 2010 study studied the top 0.1 percent, who currently make at least $1.7 million. That’s 14-times less than our Fortunate 400 group, but it’s the closest we’ve got. Four in ten in this group were executives, managers, and supervisors at nonfinancial firms. Eighteen percent were financiers. Next came law (7 percent), medicine (6 percent), and real estate (4 percent). My guess is that the top 400 skews toward finance and chief exec even stronger. A lawyer/doctor making $2 million I can imagine. But $24 million?

(2) Capital gains absolutely dictate the wealth of the richest Americans. As Matt O’Brien graphed for us, that’s why the income of the top 0.1 percent hugs the S&P so closely.

(3) Remember that as this is happening, the long-term capital gains tax rate has fallen from 28 percent in 1990 to 20 percent for the latter half of the 1990s to 15 percent under George W. Bush.