Coming up with a down payment is often a first-time home buyer’s biggest challenge. That’s why many of them get a little help from relatives or friends.  In 2010, 27% of first-time buyers received a gift from a friend or relative to use toward their down payment. That was up from 22% in 2009 and 23% in 2005, according to statistics from the National Association of Realtors.

“Attitudes have changed regarding down payments. During the boom, 100% financing was common. Now, people are getting used to the fact that they have to put more money down to qualify,” says Russ Martin, branch manager and mortgage adviser for PERL Mortgage in Chicago. 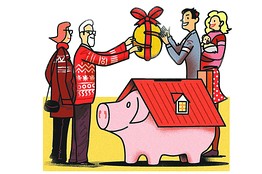 A typical 10% down payment on a home in Chicago could be up to $30,000 or $40,000, he says. Most of his clients are putting at least 10% down these days, and half make a 20% down payment.
While some buyers are able to get Federal Housing Administration mortgages with down payments as low as 3.5%, others don’t have that luxury, says Rande Bronster, a real-estate agent with Zip Realty in Los Angeles. Ms. Bronster recently had two clients who decided to buy in condo complexes that weren’t FHA-approved. If they wanted the homes, they were going to have to come up with more cash.
“They all have had enough income and they’ve saved some money, which is not easy for anyone to do, young or old,” she says.
Many times a gift will allow buyers to make a down payment without severely depleting their savings—a huge plus in an uncertain economy. Most lenders will require borrowers to have some money in the bank after closing.
For the giver, there can be some tax implications to large gifts, and they should check with their accountant about their specific situation.
For the person buying the home, here’s what you should know to make your closing process as smooth as possible.
1. You may need to put down some money of your own.
One important point for loans backed by Freddie Mac: When the loan-to-value is greater than 80%, if a relative gives a gift to help out with the down payment, then the buyer also needs to cough up at least 5% of the purchase price from his own funds, according to Brad German, a spokesman for Freddie Mac. There are additional restrictions when the related person is the seller, Mr. German adds. Gifts are not allowed for mortgages on investment properties.
The 5% requirement gets dropped in other gift situations, such as when the gift comes from an agency as part of an agency program, Mr. German says. For FHA mortgages, the entire 3.5% down payment can be a gift, Mr. Martin says.
Fannie Mae allows all down payment funds to come from gift sources for loans on one-unit principal residences.
The thing that is tricky about this is that few people know whether the loan will get sold to Fannie or Freddie. That’s why “their lender is the ultimate decision maker on whether to make a loan,” and what the down payment requirements will be, says Andrew Wilson, Fannie Mae spokesman.
2. Gift documentation is a must.
When using a gift as a down payment, it must be properly documented.
“If I have a borrower who has $10,000 in their bank account and see there’s a $5,000 deposit, I want to know where that money came from,” Mr. Martin says. But there have been cases when even smaller amounts have caused a hiccup in the loan-approval process.
A gift letter should be signed and dated and include the giver’s name, address and telephone number, along with his or her relationship to the borrower, according to Total Mortgage Services, a mortgage lender. The letter should also include the address of the property being purchased, the dollar amount of the gift, and when the money was transferred and a statement that it is, in fact, a gift and no repayment is expected.
Documenting gifts can become difficult in cases of many small amounts. Consider, for example, the newly married couple who will be using a number of cash wedding gifts in their down payment. While sometimes a letter of explanation and a marriage certificate will suffice, other times lenders figure they’re safer if they require more thorough documentation.
3. You don’t need to document when gifts are ‘seasoned.’
Once a gift has been parked in your bank account for three months or more, it’s considered “seasoned,” and therefore doesn’t need a gift letter to explain it, Mr. Martin says. At this point, the money is considered yours and a gift letter becomes irrelevant.
Ms. Bronster recommends that buyers who know they will need a gift to make their down payment get the money at least a few months in advance to eliminate worry about proper documentation.